I have some more tabs for my latest YouTube upload!

Again we're dealing with some extended fretting patterns in the left hand, but the intention is to keep the right hand sweeping through these far-reaching intervals without having it sound too disjointed. These licks are dated from October 16th, 2012 and I decided to revisit them because I had only posted them as audio to my Facebook page.

The licks start off rather docile but they end up looking sadistic toward the end. The 6th to last lick (I believe) in D minor is a BEAST. I couldn't help but laugh when I saw the tabs and tried to figure out which way to warp my fingers. It's still playable though, and once the fingers adapt you'll be able to revert to the earlier stretches and see them in a new light. If you have a large enough reach it shouldn't be a problem; my hands are accustomed to this kind of thing by now, but I don't have Rachmaninoff sized hands. I'll share a bit of insight into each lick and then I'll showcase the tabs and the video link at the end.

1) A basic AM7 arpeggio, with the pinky doing the sliding on the high E string.

2) Another extended AM arpeggio shape - playing the 2nd on the A string is the real difficulty because everything seems very compressed shape-wise.

4) B mixolydian arpeggio in tight quarters again. There are a few like this, where you're moving up and backwards on the fretboard. It starts on A but it is seen as the b7.

5) Bm7 arpeggio. Pretty straight forward theoretically, but it moves like the previous lick and is uncommonly played in this shape.

6) I like to see this one as a form of highlighting the melodic minor scale in a sweep. It is in Am (most of the shapes start on A). The cool intervals come around when you stretch from the F# (6th) to the 2nd/9th (B), a fourth, then followed by a minor second interval from the 2nd to the minor 3rd (C).

7) Another simple one in theory: whole-tone. The biggest pain in the ass is choosing which fingers to use in this lick. The pain with whole tones (and tri-tones) is the incongruity of the shapes on the guitar neck; they tend to be very angular.

8) This is based on the 4th mode of the melodic minor scale (Mixolydian #4). Notice the tri-tone b5 interval between the G and B strings.

9) 2nd mode of the melodic minor scale, Dorian b2, turned into a sweeping lick. The first three notes are played with 1, 3, and 2 fingerings respectively, it will free up the index to move to the next string.

10) 5th mode of the melodic minor scale (the Hindu I believe it is called). A good change of direction occurs and an interval of a 5th is thrown in. All extremities are played with index and pinky, the inner fretting is about comfort.

11) This revolves around the Phrygian Dominant scale, or the 5th mode of the Harmonic Minor modes. A fairly easy one compared to most. 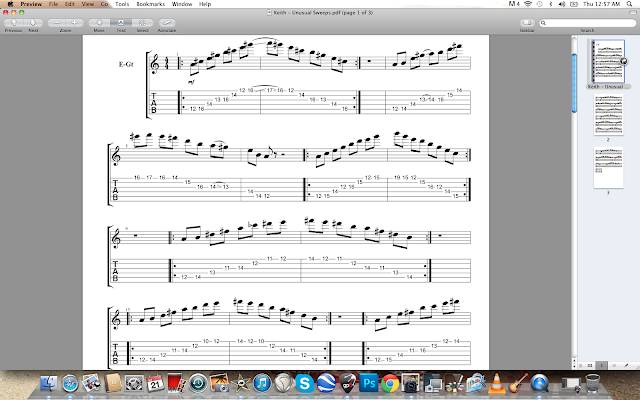 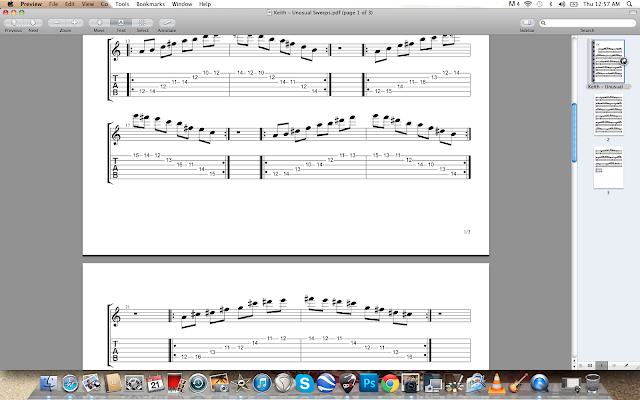 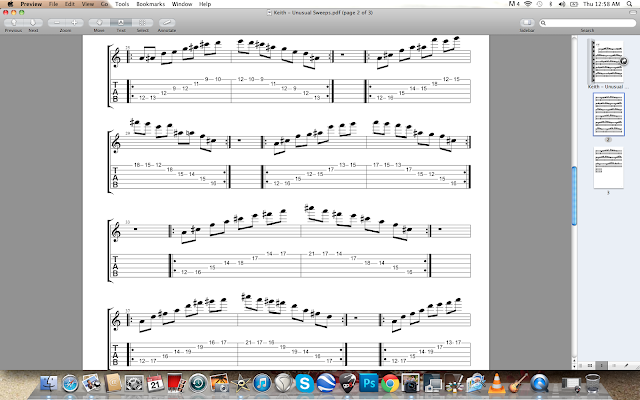 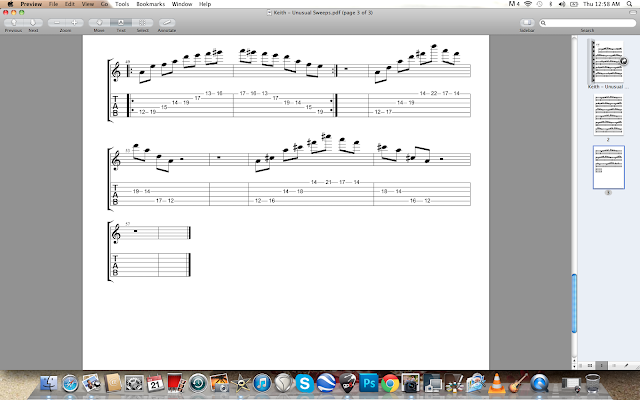